The World of Tékumel

Maps on Tékumel generally consist of a set of instructions of how to get from one place to another with landmarks, travel times and advice included. 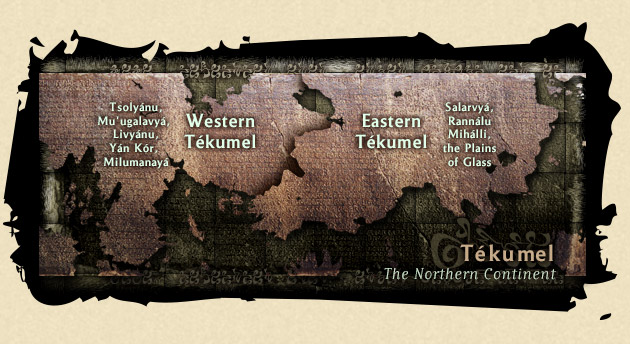 The Tsolyáni merchant clans require line/circle maps for economic purposes and do not decorate them much. More detailed maps are works of art: a stylised portrayal of a town, for example, with figures of its residents drawn in here and there. These ‘picture maps’ are for upper class clansmen who want to see what a given city looks like and who lives where in it.There are no maps made just to display terrain like a seacoast or mountain range.

The west of the northern continent is the most densely populated area on the planet, and ancient empires cover the land. The Empire of the Petal Throne, Tsolyánu, ruled by the Emperor in the Golden Tower in Avanthár; the land of Livyánu where the inhabitants worship the mysterious Shadow Gods; Mu’ugalavyá; Shényu, occupied by the reptilian Shén; the vast jungles of M’mórcha and the Great Desert of Galái; the tribes of Milumanayá; and Yán Kór, where the Baron áld plans his revenge upon the Tsolyáni who betrayed him.

To the East lie vast lands, large areas of which are unexplored, or too dangerous to wander. The great empire of Salarvyá hugs the fertile southern coast, but much of the east is mountainous country occupied by tribes, and small nations with complex clan territories. The ancient land of Mihálli still slumbers, dreaming of the glory of the Engsvanyáli priestkings, and the Ssú carry on their endless war with the hardy warriors of Pecháno. Across the barren Plains of Glass the winds scour the barren land as they have done since the Time of Darkness.

There are dozens of smaller nations, tribal territories and principalities as well, and the alien races occupy their own lands: the Shén south of Livyánuin, the Pé Chói in the forests of Dó Cháka, the Hlutrgú in the Layóda Swamps, etc.

The southern continent is largely unmapped and unexplored.

land masses and of the country of Tsolyánu

when compared with our own earth (images by Neil Smith).

Information in this section paraphrased from Swords and Glory Volume 1, M.A.R. Barker; Adventures on Tékumel: Gardásiyal Deeds of Glory by M.A.R. Barker and Neil R. Cauley. Published 1994 by TOME (Theatre of the Mind Enterprises). Copyright ©1983 and 1994 M.A.R. Barker. Additional information from the Blue Room Mailing List.