Milumanayá is a desert and mountain land, inhabited by nomadic tribes practicing a simple form of popular democracy.

Milumanayá is in fact almost three separate nations. The Warlord of Pelesár, a one-time Mu’ugalavyáni renegade named Akurghá, rules the west through a wild and undisciplined ‘army’ of personal retainers. The east lies under the sway of Lord Firáz Zhavéndu, whose hatred for his son, Lord Firáz Mmulávu Zhavéndu, is fast becoming legendary. The third and largest region—though politically the least important—is the Desert of Sighs itself. The nomads who dwell there bring every branch of tribal custom to a vote of their entire band, with predictably anarchic results. There is thus only an illusion of a national government and a rather sketchy administration, army and civil service in and around Sunráya. The primary reason for Milumanayá’s continued independence is its usefulness as a buffer zone—and the uncongeniality of its windswept sandy deserts. 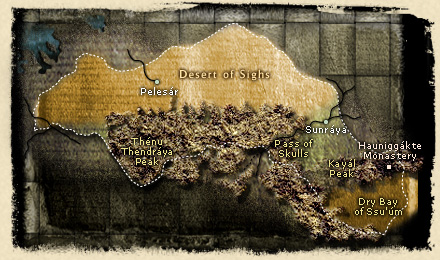 The nomads of Milumanayá display great tribal dignity and a fierce commitment to honour, but their predilection for ‘total democracy’ makes them the butt of many jests.