Livyánu, the mysterious land of sorcery, lies across the sea to the southwest of Tsolyánu.

The society of Livyánu is completely dominated by the priesthoods of their Shadow Gods—civil, military and religious affairs are handled by functionaries detached from temple service. The details of their system are not revealed to outsiders, and many Circle memberships are deliberately concealed. As far as is known, the highest official is one ásqar Gyardánaz, ‘Principal Staff of the Glory of Qame’él’, who presides over the central Council of the Priesthoods.

The Livyáni are tall and graceful: men average 1.70m inheight and women 1.63m. They are often of a boyishly slender build, dolichocephalic, with straight or retrousse noses, wavy black or dark brown hair, a golden copper complexion, and little body hair. Livyáni females are frequently high-breasted and narrow-hipped, and tend to remain in seclusion, only emerging masked in curious disguises representing beasts, demons and gods. Both men and women tattoo their faces with intricately tiny designs taken from their mythology. 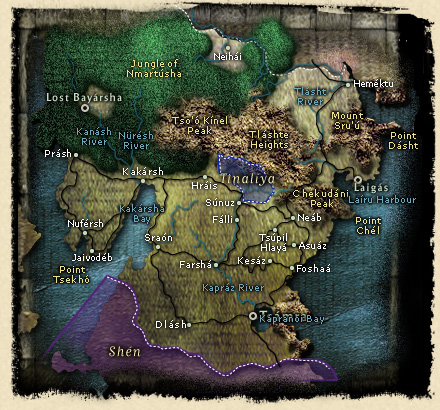 Theocratic Livyánu has the most divergent pantheon in all of the Five Empires. Their Shadow Gods are kept shrouded in mystery, their attributes often deliberately misrepresented to foreigners, and their hierachies are only distantly polite to the priesthoods of other lands. It is certain however that interplanetary magic and the summoning of ‘Demons’ make up a large part of their rituals.

The Tsolyáni stereotype of them is of sophisticated, devious, smugly pious poseurs, aloof and full of airy conceits. The Livyáni religious secrecy doubtless reinforces this reputation. They are also considered law-abiding and cultured however.