“Players of my World of the Petal Throne quickly learn to shiver just as much at the mention of the sound of chiming and the odour of musty cinnamon ... as they do at the creaking of Dracula’s coffin and the distant bellowing of the minotaur.”

“The book you hold in your hand contains a description of a new fantasy world, together with rules for conducting adventures therein.” 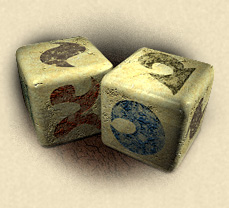 Thus began the first official set of rules for adventuring on Tékumel—The Empire of the Petal Throne, published by TSR in 1975. EPT, as it is known, didn’t go on to enjoy the same success as Dungeons and Dragons, but there’s no doubt that it was an infinitely more satisfying, challenging, adult role-playing game that took the hobby of role-playing to a previously unattained level. For those looking for something more real than the usual generic fantasy, the world of Tékumel was the perfect place for epic adventure. Many players came ‘off the boat’ in Jakallá to find themselves plunged into a exciting new culture that never ceased to fascinate.

In this section you can find pages and pages of material to enhance your adventures on Tékumel, from descriptions of rules systems official and unofficial, to several fully complete scenarios, to characters and creatures you may meet in the cities and wildernesses.

Much of the information in this section was originally compiled and maintained by James Maliszewski. Comments, suggestions and additional material are encouraged. Note that most of the information here is non-canonical, or not ‘real’ Tékumel, but the creations of various authors adding their inventions to Professor Barker’s creation.