The surly, warlike, reptilian Shén are excellent warriors, but they are too involved in their intricate rituals and egg-group power struggles to take much interest in human affairs.

Shényu is divided into states, each organised around constellations of friendly or neutral egg-groups (Shényu and Mmátugual) or single egg-groups too divergent from the others for any form of cooperation (Gái, Rá, Qónu, etc). Their power structure is based upon the domination of the smaller, weaker egg-groups by the larger ones; best seen in meetings of the Hrg Ssa, the council of senior males which governs every Shén city.

Amongst their many deities, ‘the One of Eggs’ and ‘the One Who Rends’ are predominant, and can be identified with Stability and Change, respectively. 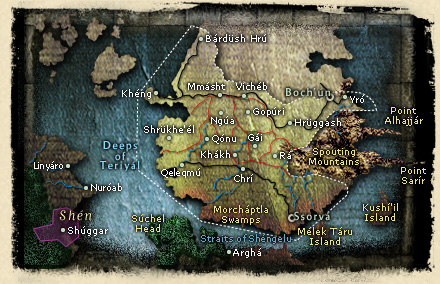 Shén dislike delicacy and overrefinement, valuing strength, violence and endurance instead. They are great traders, own slaves (often humans), maintain entourages of retainers, and display their standing in the community through personal adournment. For more details on the Shén race, see their entry in the Nonhumans Section.