Here are detailed some of the smaller nations and less populated lands of the western half of Tékumel’s northern continent.

The Great Deserts and Jungles

North of Livyánu and northwest of Mu’ugalávya lie vast stretches of land—the Great Desert of Gálai and the Jungles of M’mórcha and Nmartúsha. Among the jungle’s inhabitants are the squat, half-human tribes of Fungus-Eaters in northern M’mórcha and the almond-eyed dwellers in Lost Bayársha. The jungle tribes worship an archaic mother-goddess, but her role is largely passive, and supernatural action occurs through the agencies of the ancestor-spirits, certain ‘nature-deities’, and a variety of mythological figures. The Fungus-Eaters are fanatically devoted to the Mu’ugalavyáni cult-deity, Hrsh. The tribal peoples are unpredictable, fearful of strangers but dangerous when crossed, and curious about everything (sometimes to their own detriment). 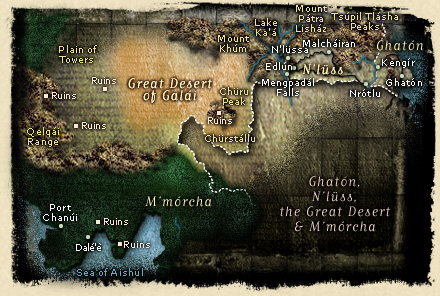 The N’lüss are tall and muscular, 2.3 to 2.15m in height. They compel the Mu’ugalavyáni to maintain large garrisons along their northern frontiers, and bands of these huge barbarians are welcome by both the armies of Yán Kór and Tsolyánu. Each band of N’lüss consists of several extended families of commoners, plus one or two ‘noble’ lineages, from which the hereditary chief (N’lüss: Sárq) is chosen. This applies even to towns such as N’lüssa and Malcháiran, but the lords of these places have had to employ foreign scribes, clerks, and functionaries to deal with the complexities of an incipient urban society. The old traditions still persist, however, and the wishes of the Sárq of Malcháiran carry all the force of an Imperial edict in Tsolyánu.

The N’lüss worship Vimúhla and Chiténg, being descendants of the Dragon Warriors. They distinguish between ‘nobles’ (ie. lineages from which chiefs are hereditarily selected) and ‘commoners’. Within each of these two groups wealth then plays a part. They are seen as rowdy, pugnacious, brutal, and honourable to a fault.

The Ghatóni dislike the ‘women-ruled’ Yán Kóryani but still grudgingly send a few contingents of troops and trained Serudla-beasts (which only the Ghatóni know how to domesticate). Their government consists of a loose confederacy of clan-chiefs (Ghatóni: Sá Sréq). The latter is responsible for the national army, customs and tax services, and the Sákbe Roads (which are nevertheless in very poor condition). There is clear hierarchy, however, and each clan keeps the peace within its domains, settles internal disputes, and watches over its larger interests. National cohesion seems to be based more upon fear of the Mu’ugalavyáni (and now the Yán Koryáni) than anything else, and the army receives the greatest share of the national income.

The Ghatóni have a host of ‘nature gods’ (eg. the wind, the rain, the sun etc.) which they sometimes identify with likely counterparts in the Tsolyáni pantheon. 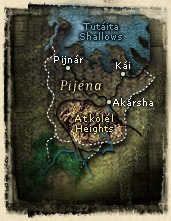 Pijéna, now occupied by Yán Kór, provides the Baron áld with soldiers, and has a social structure similar to that nation. Previously the country was divided into several petty clan-based principalities, just as Yán Kór was before the emergence of the Baron. The Yán Koryáni have allowed the titular ruler to remain as a puppet. He is the Priest King of She Who Is Not Seen (a peculiar local aspect of Avanthé), whose ancient temple-palace is in Pijnár. The Yán Koryáni are attempting—with indiff erent success—to reform the administration, establish ‘Circles’ and persuade more Pijenáni to take an interest in a national government. By other nations, the people of Pijéna are seen as weaklings, greedy, and untruthful. 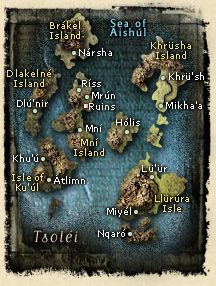 Tsoléi and its disunited, piratical sailors and fisherfolk is of interest politically only as a bone of contention between Livyánu and the Shén states. Each of the islands forms a weak city-state by itself, ruled by petty princelings in a system that is easygoing, vague, and chaotic. There is no system of taxation, no national army, and little cooperation between the various islands. Only the semi-annual raids on the coasts of Livyánu bring about a joint effort, but every ship is privately owned, and plunder is not shared with the other crews. They worship local spirits inherent in rocks, caves, odd-shaped stones, and the sea; they are also heavily missionised by Livyáni and Mu’ugalavyáni priests. Rule is by hereditary families (except for Llürúra Isle, where a ‘king’ is elected at the beginning of each year and then slain at the end of it as an offering to the sea), but social prestige in Tsoléi depends more upon one’s place of residence and one’s material possessions. The Tsoléi are carefree, amiable, hospitable and disorganised; they also are given to acts of brutal piracy. 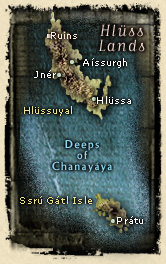 The lonely islands of Hlüssyal and Ssrú Gátl are home to the insectoid Hlüss. It is believed that there is a supreme Hlüss-mother who governs all of the domains of this species from her capital at Hlüssyal. Each community and nest-ship has its own female regent, under whom the males and the neuter worker-fighters serve in various capacities. Parties are frequently accompanied by ‘scholars’ )for want of a better term) who utilise the magic of other-planar power.

The Hlüss faith (if any) is unknown. They are implacable enemies of Man but also exhibit a lively inquisitiveness, greed for power and possessions (particularly ancient devices and gems), and a love of bodily adornment. For more information, see their entry in the Nonhumans Section.