Yán Kór to the north is a hardy land of forthright, sturdy men—and even stronger women, since matriarchy is the general rule—ruled by the Baron áld, formerly a general of Tsolyánu.

Before the emergence of the charismatic Baron áld as national leader, Yán Kór was little more than a loosely allied jumble of city-states, clan-matriarchies, and petty principalities. During his short reign the Baron has managed to impose a degree of uniformity; functionaries of the national government are now organised in ‘Circles’, as in Tsolyánu, and all areas now pay their taxes into the coffers of the central government in Yán Kór City.

The Yán Kóryani are 2-2.5cm shorter, on average, than their Tsolyáni neighbours to the south. They are stockier, heavier, and sometimes bow-legged. 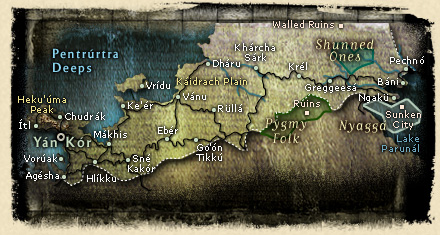 The gods of the north are almost identical to those of the Tsolyáni pantheon, although their names and rituals do vary somewhat.

The Tsolyáni characterise the Yán Kóryani as rustic imitations of their southern betters, peripheral upstarts, and crude barbarians—though they do have a reputation for courage and loyalty.