The Plains of Glass

Distant Nuru’ún, ancient Mihállu, Rannálu and the windblown and forlorn expanses of the Plains of Glass.

Reports are duly prepared but never forwarded to Gánga, sunk these many centuries beneath the distant seas.

Mihállu exists as though frozen in time, and while the titles of the old nobility are flaunted, they have become meaningless. 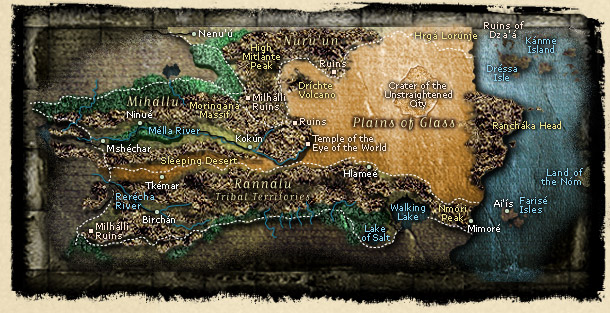 The tribal people of Rannálu have no organised government at all.

From Chayákku over to Nuru’ún, men have the reputation of being loyal, proud, and interested mainly in hunting and war—and their women are known as shrewish, passionate, and more inclined to stab a man than to reason with him! The inhabitants of Mihállu are quite the contrary: passive, lazy, easy-going, uninterested in events outside their long river valley, and much given to quoting the proverbs of their Engsvanyáli ancestors.

The people of Mihállu follow Pavár’s twenty deities much as do the Tsolyáni since this region was an old Engsvanyáli colony. The tribal folk of Rannálu, however, venerate a single mother-goddess, roughly equivalent to the Salarvyáni cult of Shiringgáyi.