A Khirgári Personality by Patrick Brady 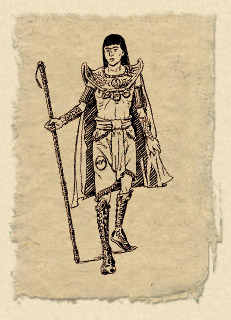 The Temple of Thúmis is not strong in Khirgár, but it does have some notable members. One of these is Orun hiKharsan, a native of the city and deputy head of astrology at the Temple. His clan, the Hall of Stone, is a small, medium ranking clan with a long history of Thúmis worship in Khirgár. Orun is a man afflicted by a great curiosity and blessed with a fine grasp of where to find the right kind of people to help him. For that reason, he is a gift to a referee who needs to bring new characters together.

A small young man, with the distinctive darker skin of a native of Khirgár. Orun is a bit weedy but not unattractive. He wears a cloak and carries a staff of office. He is clearly a Priest of Thúmis and is usually rather overdressed for the weather (he prefers extreme heat). He wears a variety of expensive amulets, mainly to Lady Avánthe and Lord Thúmis. A close search would detect the presence of at least two flat bladed throwing knives cleverly concealed about his person (hardly standard issue for an astrologer). He carries a belt dagger in the Engsvanyáli style.

Orun was born into a Thúmis worshipping lineage in Khirgár, with the planet Ziruna in the Midheaven and in opposition to Uletl, the upshot of which is that he is a natural astrologer with an aversion to sculpture and history. Orun's parents were Priests of Thúmis, and both were killed by natives on a field trip to Pijéna. Orun has never forgiven this, and it colors his view of foreigners to this day ("Murdering foreign scum !").He is well known for his interest (some would say morbid curiosity) in the more complex unexplained events. Initially this derived from the political polarisation between his own sect and its opponents in the Temple of Ksárul (a Temple which is strong in Khirgár). Orun has investigated everything from bizarre crimes to supernatural events, all for the glory of Lord Thúmis. He is well known for his interest and competence in this area.

Orun is a highly educated genius and a truly brilliant astrologer. So he may reasonably have any skills which will advance the plot, but will palpably lack the more heroic aspects (so as not to over-shadow players characters). So he should have high levels of historical, medical and local knowledge. He is physically weak but has a reasonably good stamina. This means he need help but is not himself a burden.

Somewhere between Sherlock Holmes and Professor Moriarty. Orun is close to being a Thúmis fanatic, the truth is his religion. So there is a strong religious justification for his native curiosity and his involvement in detective work. Orun distrusts virtually all Ksárul worshippers, because he knows he is on a Ndálu Clan's "to be murdered" list. He dislikes foreigners generally and also developed a dislike of thin women during a recent poisoning case ("I never trust a woman who eats less than I do !").

Orun is a good enabling device because of his interest in bringing together the right people. When something piques his interest, he is too smart to simply rush at it. First he makes preparations, he uses astrology to find the right people for a given problem. His faith is so strong that if his calculations tell him that the person he needs will be found fifty Tsán away on some desolate mountainside, he will go there and find them. He has never been wrong, although occasionally he finds it difficult to explain why he needs a peasant herd-boy or a Chakan Vringalu-hunter, he knows that he will. He has faith and that can be very persuasive.