The Supreme Principle of Change, Master of Negation and Nonbeing, Opponent of Permanence, and Dispenser of Calamities. 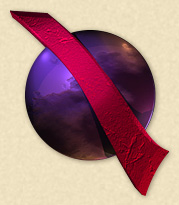 Hrü’ü seeks the Dark, an end to choate form, a negation of this world of phenomena, and a return to the Nullity which existed when time was not. When this Nullity is achieved, he will then bring forth a new and chaotic beginning, and this in turn must be brought down, destroyed, and replaced with another Being, and so again and again for all time to come. He glories in Change without cessation, neverending, random and unpatterned, always roiling and shifting.

He aids those who fight for Change, those who attempt to undo the social order, those who bring about their own glory with no thought of others, and those who are of a secretive and yet grasping nature.

Hrü’ü is usually depicted as a bulbous, featureless circle of purple from which eight slender arms extend outward like the rays of the sun. In each of these hands he holds the insignia and devices of his power: swords, lamps, a barbed hook, a scroll, etc. His symbol is a circle of purple with a scarlet slash running down across it from left to right. The Aspects of Hrü’ü number 78. His priests and priestesses conceal themselves beneath purple robes and go masked in velvet and Chlén-hide shaped into the likenesses of his demon servitors.

His temple is dominated by the Cusp of Night Society, which supports the Ndálu Clan who seek power through political intrigue.

The Cohort of Hrü’ü is Wurú: the Unnameable, He Who Appears Where Evil Dwells, the Many-Legged Serpent of Doom. He is the active antagonist of Stability, pictured as a great serpent with many centipedal legs, antenna, and six great staring eyes. His symbol is a stylised serpent's head with tongue protruding, and he has 18 Aspects.