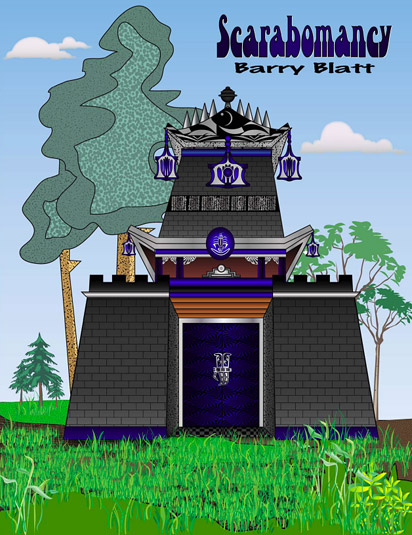 Ohé! Let it be known among the wise that the ancient and most perfect art of Scarabomancy has been rediscovered and that lectures in such will commence in Tumíssa on 12 Fésru, at the gong of Awakening in Azure at the Temple of Ksárul.

Herein I shall outline for the curious what this art entails, for in this decadent age few, even among the wisest of the wise the adherents of the Doomed Prince, have even heard of this most marvelous method of divination and interpretation of the knots of Skeins of Destiny.

First you need a scarab beetle, obviously. This attractive little beetle is most sacred to Ksárul, master of the mightiest beetles that roll the planets and moons through the sky, and himself manifest in the great fireproof beast that moves the sun itself. Each scarab is, in a minute and most infinitesimal way, an aspect of Ksárul himself and thus can impart wisdom from beyond this most mundane of planes.

Second you will need chalk and a bit of flat floor, and on it you shall inscribe the Ten-Fold Circle of Fate and the Fifty-Five glyphs of the Tongue of the Scarab (copies available from me after the lecture, price 50 káitars and worth every qirgál). The very best method is to permanently incise the Circle on the floor of a dedicated Shrine of the Scarab, but as the Provost of the Fabric of the Sacred Space has no spare rooms at the moment, I will instruct students in the use of Mríddu’s most marvelous chalk.

Thirdly, you will need pen, ink and paper, and fourthly, the most important ingredient, dung. Most dung will do, chlén is ideal, but hmá and hmélu do just as well. Do not be tempted to use human dung! It is easily available (all too easily given the woeful culinary standards of the Tumíssan temple refectory) but the stench is awful, the consistency poor and it will make your scarab ill, if he can be persuaded to approach the stuff at all.

The procedure is as follows.

Ask the questioner (or yourself (but not out loud or people will think you mad, which I am not)), to state their request of the Mightiest and Wisest of Gods in no more than thirteen words and two symbols of punctuation. Write this question, in any language, scarab beetles are perfectly multilingual like their master, on a piece of paper two chóptse wide by one hoi long and roll it into as tight a cylinder as you can.

Take a lump of dung in the hand, ten mló will do nicely, but a weak or small beetle might only be able to cope with seven or eight, and roll it into a ball. Insert the question into the ball of dung and place it on the Glyph of Questioning in the very centre of the circle.

Take a Dársha leaf, and roll it round a mló of Aíra grass, a mló of Chümaz, three mló of Hnéqu weed and a pinch (and believe me, only a pinch) of dried Urugál root. Set fire to the rolled herbs and inhale the smoke in Lorúni fashion. When the room has stopped spinning, get your scarab and blow upon it the smoke. When the scarab has stopped waving its legs in the air and coughing place it on the circle at the Glyph of Wisdom (that’s the big square one).

Observe closely the path it takes to the question using the left eye, and then observe closely the path by which it rolls the ball of dung out of the circle using the right eye. Do not use both eyes at once! If this process takes more than two kirén you have probably used too much Aíra grass. If you lose consciousness before the end of the process I suggest you use fresher Chümaz, and if you find yourself distracted by the green translucent Vringálu singing Pijenáni drinking songs you have used too much Urugál root and should seek professional demonological help immediately.

By analyzing the path of the sacred scarab it is possible, with practice, to determine with amazing accuracy the course of the questioner’s skein of destiny with respect to his question. So if you are asked “Ohé, shall I wed the handsome mat weaver or the ugly slave merchant?” and the scarab crosses the Glyph of the Impaled Ahoggyá, the Glyph of the Left-Centre Eye of the Zrné and then abandons its ball of dung on the Glyph of the Missing Finger and bites the questioner, the answer is of course neither you silly person, you are going on a long sea voyage in the course of which you will inevitably drown.

The many relations of Glyphs to knots of fate are detailed in the scroll “Key to the Skein of the Scarab, or Silly Answers to Stupid Questions” by the mighty seer Arkha’anú the five-legged, who himself was a scarab, so he should know. Copies of this are being produced in the scriptorium of the Plume of White clan for those students willing to take ship on this barge of most excellent wisdom to its ultimate destination, the Sea of Fate itself.

Oh yes, the last stage of the process is wash your hands.

Rusála Yi’íisia hiNáshomai, Friend of the Scarab, Twitcher of the Refulgent Blue Curtain, Kusijáktodáli of the Temple of Azure Ambivalence etc. etc. Teacher of Scarabomancy