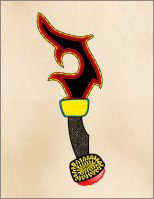 Jewelled Pommel is a High clan based around Usenánu but with clan houses in Penóm, Butrus, Thráya and Béy Sü. The clan claims its ancestors made armour for Lord Karakán’s armies in the Battle of Domóron Plain. In Engsványali times, Jewelled Pommel made armour and weapons for the Priest-Kings and their courts. However in the Second Imperium, due to changing trade routes and the scarcity of metal deposits, Jewelled Pommel has become mainly a mercantile clan, specialising in exotic trade goods such as fine liqueurs and narcotics. The most popular of these narcotics are stimulants, sold to warriors, gladiators and high-clan duellists, although many adherents in the Temple of Karakan frown on such substances. Although the clan claims to proudly uphold its heritage, you'd be hard-pressed to find a clan-member who remembered the clan’s original metal-working secrets. However, the clan continues to prepare and decorate Chlén-hide armour and weapons that will be mostly used on a ceremonial basis. Jewelled Pommel’s merchants are always looking out for expensive stones for their decorations.

Traditionally, Jewelled Pommel’s rivals have been the Great Stone clan, who are an important trading clan within Usenánu. Jewelled Pommel traditionally supports the Blade Raised High clan, although tensions between the two clans have become strained of late. In terms of business relationships with other clans, Jewelled Pommel traditionally deals with Green Malachite for river shipping and travel arrangements and often obtains worked jewellry from Silver Lightning to set upon armour or weapons. Many of the clan’s house servants and labourers are hired from the Scarlet Mantle and Broken Reed clans respectively.

The clan traditionally favours the gods of stability, especially Lord Karakán and Lord Chegárra, however worship of the Gods of Change have become popular with some of the younger generation, much to the disapproval of the clan’s older members.

In recent centuries, the resources, influence and prestige of Jewelled Pommel have declined. Several of the clan’s traditional sources of income are unavailable and the clan owes several important debts to the Blade Raised High clan in Usenánu. Some members of other clans will warn others that Jewelled Pommel suffers from some strange curse, but the clan itself claims that its travails are nothing but happenings of unfortunate circumstances. Nonetheless, the clan proudly upholds its heritage.

Jewelled Pommel’s main clanhouse is in Usenánu. The main clanhouse is reached by heading through a huge set of wide gates, located on Etukómel Street, and then by navigating along a rutted track through towering stands of dark-leaved tiu trees. A strange, lightning-blased tower is located to the left of the main courtyard, richly decorated with symbols of Lord Karakán. Clan-members will tell you that this tower of the 'The Tower of Indomitable Might' and was constructed by the clan’s last leader, Bálesh hiPagártra, who claimed that Lord Karakán commanded him to build the tower in a dream. However, one night when Bálesh was surveying his construction during a storm, the tower was struck by lightning. Bálesh fell from the parapets and the tower was never completed.

The main clanhouse is wreathed with vines and the western section of the clanhouse has a newish, plastered look, as though it were recently repaired. Upon closer inspection, although these repairs seem highly competent, they fail to match the squat granduer of the other side of the clanhouse and give the structure a lop-sided appearance.

The clanhouse is usually busiest in the early morning or evening, as clan members and visitors are constantly in attendance. Porters wait in hidden shelters cut into the clan house’s outer wall, ready to assist at a moment’s notice. A rutted track splashed with dried Chlén-droppings cuts away from the courtyard, heading southwards through overgrown stands of trees. The main clanhouse consists of a main house which holds the clan’s meeting chambers, official dining hall and administrative rooms. The massive entrance way to the clan house is a wondrous display of wealth and serves as testament to the clan’s past glory, with suptuously decorated samples of armour and weapon on display.

Visitors may notice that a room in the western part of the clanhouse is sealed by a set of double bronze doors, heavily inscribed with glyphs of warding and protection. Around the edges of the doors, the pale red plaster of the walls and ceiling is heavily cracked and faintly scorched. Clan-members however will deflect any questions about this section of the clan-house and offer to show the visitor some of the historical trinkets in the clan’s trophy room instead. Some curious visitors claim that they can hear, usually late at night, faint scratchings on the far side of the door, but they are always assured it is merely insects or grain-stealing lizards.

At the back of the clan-house is the clan’s apartment buildings for its members: a lodge for its non-human members (Jewelled Pommel has a long historical association with Pachu Lei (due to Flame Opal trading) and Pei Choi), a lodge for unmarried men and women and a lodge for married couples and families. There is a practice field 'The Field of Glorious Victory' when young clan braves are taught the art of weaponry. The clan has its warehouses and workshop areas at rear-end of the clan’s territory, where rough Chlén-hide is brought in and then sculptured to suit the extravagent tastes of buyers. Newer warehouses holding the items of the clan’s recent trading developments, including popular stimulants such as the `The Fiery Blood of the Inexorable Reaver' and `The Dust of One Thousand DownwardCuts.'

Like most clans, Jewelled Pommel observes a variety of important clan rituals. Most of these rituals are conducted by the clan’s High Ritualist, who is usually a priest of Karakán. Marriages in the Jewelled Pommel involve the groom dressing in elaborate, ceremonial armour and fighting a ceremonial duel in order to `win' his bride, although Shéresa hiSaika (an aridáni woman) set a precedent over four hundred years ago when she donned the armour herself and won her husband. Births are celebrated with tiny gifts of decorated Chlén-hide swords (for boys) or shields (for girls). In times of crisis, a member of the clan has traditionally volunteered to become `The Exaltd Messenger to the Warrior on the Final Day' and are gloriously sacrificed to Lord Karakán, after several months of lavish gifts and sumpteous feasts. This is believed to bring good luck to the clan as Karakán remembers his brave armourers at the Battle of the Domóron plain and smiles upon them for their noble sacrifice.

Some of the clan’s treasures include the shards of an ancient sword `The Esteemed Blade of Mizhotl the Vanquisher of Hosts', which is used as an oracular device. The shards are tossed into the air and the pattern is deciphered by the clan’s High Ritualist, usually a priest of Karakán. Although this oracle is said to be fairly potent, it is only employed on rare occasions, such as before important weddings or trading missions. Another treasure is drinking cup made from a human skull that has been capped with bronze, although the legends around its acquisition are conflicting. The clan also has several sets of steel armour that date from the Engsványali period and are relics of the clan’s past glory.

Jewelled Pommel has not held a social function for some time, and members of other clans are quite curious (and perhaps a little indignant, as Jewelled Pommel’s members often show up at feasts at other clanhouses).

Jewelled Pommel has the following lineages:

Notable members of the Jewelled Pommel clan in Usenánu are: