The bezóar stone is found in the dgúr bladder or stomach of the hmá. They also occur in other animals, especially ruminants, but those are not as prized. Sometimes they are brittle and light, sometimes heavy and hard. As a medicine they are highly regarded and are very expensive. The bezóar is regarded as an infallible universal remedy against poisoning and against all kinds of ailments. It is sufficient to wear a stone or dip it into a drink one was about imbibe.

The Red Star clan has a special arrangement with the Silver Collar clan to custom make ornamental pieces of jewelry for your use. For a significant amount more, a piece can be commissioned at The Red Eye of Dawn clan.

Not every sword hit to the head will penetrate the skull; instead they often leave a sizeable dent. Under the dent there might be hemorrhaging, caused by the rupturing of local blood vessels as a result of the impact. In order to treat that bleeding and the associated pressure on the brain the Iron Fist clan offers this “Reliever of Indentations” for battlefield surgery, with which you can place over the injured area, turn the key to screw in the sharpened point thus raising the dented cranium. This model comes in sword quality steel and a much less expensive hardened copper. 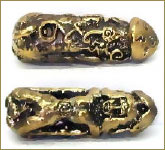 The poorer followers of the Green Eyed Lady often wear this “Pendant of Qodhúr” as a symbol of their faith and to identify themselves to others of their belief. If prominently displayed it is a signal that a liaison would be welcomed. The device is crudely cast in bronze and is thus affordable to the masses. Finely carved examples made of gold can be purchased upon request.

These enucleation and evisceration spoons are useful in the scooping out of eyes from their sockets. Designed purely for medical use, there are rumours that they have been used for darker purposes during rituals. Neither the clan nor the Temple of Keténgku are pleased with this possibility; buyers of these items are closely scrutinized.

A beautifully crafted kilt frontpiece made from dyed hmá wool and metallic thread. The iconography is a complex representation of thunder and lightning and is fashionable with the local worshippers of Karakán. This is a favorite gift from female followers of Avánthe to their War God worshipping lovers.

An aílur of the Temple of Sárku. These votive statues are made from copper and are used as sacrifices during a particular high holy day at the temple. Once per year the great verdigris clad doors of the Shrine of the Aspect Véshkuru are opened for the “Casting of the Copper”. Worshippers stand at the entry and toss in their offerings. They are rewarded with a release of heat from deep below the surface of the temple accompanied by the smell of the great living fires that melt and form the contributions into instruments useful to the Worm Lord. They are very popular amongst the mining and smithing clans and are considered a valuable part of a young clan girl’s dowry.