The comprehensive, long-awaited sourcebook that tells you everything you need to know about Tsolyánu religion ... and more. 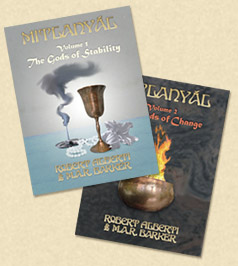 On Tékumel, religion is an essential part of everyday life, and the rituals and observances dedicated to the gods dominate culture much as the huge pyramidal temples dominate the cities. In Mitlanyál, Bob Alberti and Professor Barker explore the religious practices of Tsolyáni in never-before-revealed detail.

Volume 1: Tlomitlanyál
The lore of the Gods of Stability are set forth in this compendium of Tsolyáni religion and ritual. Learn the secrets, spells and politics of the Five Gods who oppose Change and support the Eternal Cycles of Being. Along the way, character sketches provide insights into the lives of the people who make up Professor Barker’s world of Tékumel.

Volume 2: Tlokiriqaluyál
Delve the arcane depths of the rituals of the Gods of Change in this second encyclopedia of Tsolyáni religion. The secrets of the Dark Trinity, the God of Red Ruin and the Goddess of Sensual Pleasures are set forth in careful detail, from spells of the inner circles to the rituals held in the catacombs. And character studies explore how the gods have a hand in the lives of their Tsolyáni worshippers.

Mitlanyál is available from Tita’s House of Games.